Previously, I posted a few hand-drawn sketches after running them through Inkscape’s trace-bitmap feature. In both cases, I just used pencils and paper. In the first post, I used a scanner to digitize the image, in the second I took a photograph – I’ve moved three times in the past two months, and didn’t have access to my scanner at the time (long story). In both cases, there were some artifacts to clean up, but the second definitely had more. I gave this another shot the other day, using the scanner, but this time, I inked the drawing by hand first (i.e. traced it with a pen, then erased the pencil). This gave much better results. Here’s the original: 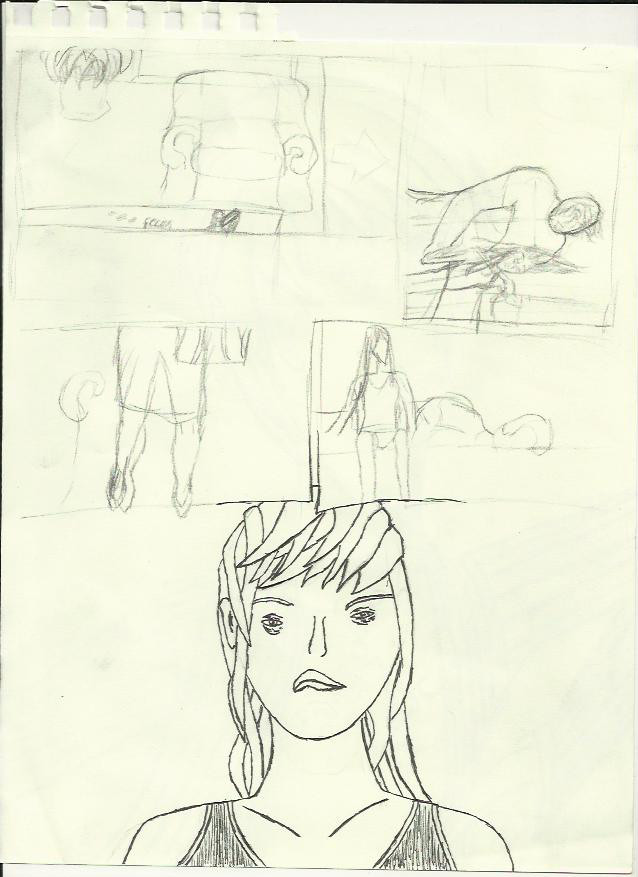 At the top there are some loose comic-panels, which aren’t the focus of this post, though they provide an interesting contrast, which I’ll talk about a little. The portrait at the bottom has been inked, and is what I’m really interested in. Here’s the traced version, with the brightness threshold set to 0.8:

I’m very happy with how the bottom came out - at a glance it looks very nearly perfect. No doubt there are probably a lot of superfluous control points in the paths, but the visual fidelity impressed me. For comparison, I tried tracing it again, choosing a brightness threshold optimized for the drawings at the top of the page. Here’s a trace at 0.9:

Obviously, the image at the bottom looks worse. The top half of the page is reasonably representative of the raw trace from my previous posts. Conclusion: inking first helps a lot.

It’s worth noting I’m actually somewhat unhappy with the drawing itself. In particular, the eyes are much smaller than they should be. I was experimenting trying to draw someone with bags under their eyes, and seem to have forgotten some other details. Still, I’m pleased by how well Inkscape was able to translate this.

I’ll probably explore this more going forward. I’ve got a new bit of tech coming in the mail that hopefully will make drawing on my machine a bit more appealing, but I doubt it’s going to surpass the experience of a piece of paper.