I’ve been drooling over Pixel Qi displays basically since I first heard about them, and for quite some time I was waiting for them to mature, start being available in actual products, and come in larger sizes. For the most part none of these things ever happened. Pixel Qi is now defunct, Only a couple products were ever made using the screens, and they never made ones bigger than 10.1 inches, 1024x600 pixels. There’s talk of eink screens with refresh rates fast enough to use as a monitor, but they’re still in the CES demo phase, which is where Pixel Qi was five years ago.

A couple months ago I discovered that the displays themselves were available on Adafruit, and I nabbed one — I wasn’t waiting any longer. I decided to worry about exactly what to put it in later. The price was pretty steep — $180 for the screen, which came with an adapter supporting VGA, HDMI, and some other connections.

The screen is designed to connect via LVDS, which is used pretty universally in laptops, so there wasn’t much to worry about in terms of compatibility when searching for machines. The tricky part was finding a machine that was the right size and still otherwise usable for my purposes.

I tested it out in the Lemote Yeeloong I had lying around, and it worked perfectly. Unfortunately, the Yeeloong is unfathomably slow. When it has to redraw large parts of the screen you can actually watch it doing so — single frame updates of dwm and xterm are human perceptible. So I set about searching for a 10.1” laptop that met my requirements.

The goal for this machine was to work outside when the weather is nice. Accordingly it needed to:

This was a little tricky to find; netbooks are less and less popular these days. They’ve mostly been supplanted by chromebooks, but I wanted something with an x86 processor. This leaves me with mostly Atom processors, which aren’t great on the performance side of things.

I ended up settling on the ASUS 1015E, and I’m pretty happy with it. It’s a 2013 model; machines like this are indeed getting scarce. I found a guide for replacing the screen on Youtube without much trouble, and put the new one in. It didn’t fit perfectly; it was offset a bit from the bezel, so some of the metal frame around the screen was exposed at the top, and some of the display itself (maybe 10 or 20 pixels) was covered by the bezel at the bottom. I ended up taking a pair of scissors to the bezel to expose the part of the display that was hidden.

Here are some photos (You can see the trimmed bezel in the second one): 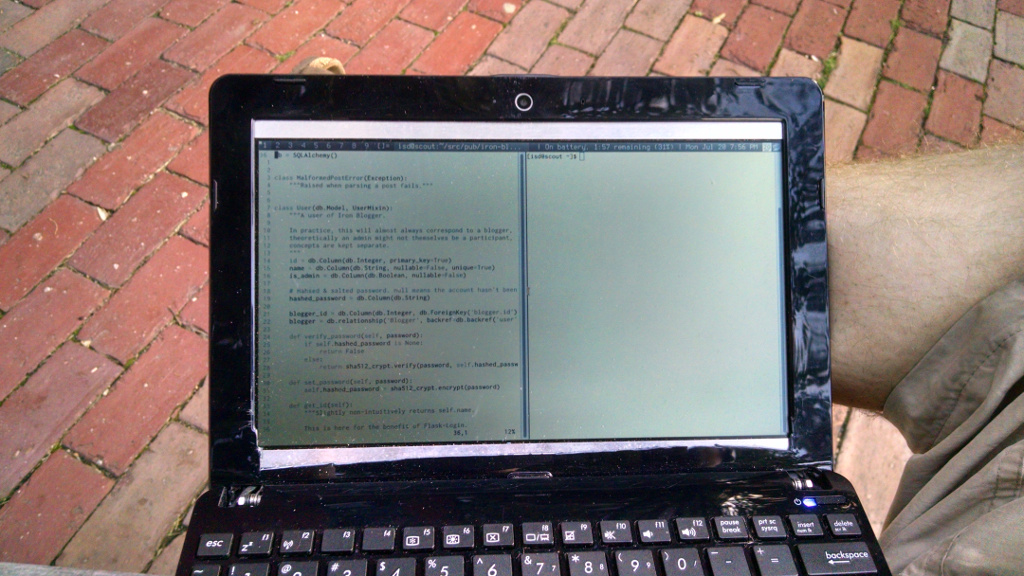 The second of those is in a fairly shaded area; you can find plenty of pictures on the web of these screens in broad daylight, often side-by-side with a normal screen (which is totally unreadable). I’m mostly using it in two different contexts:

It’s great for (2) in that it doesn’t mess up my sleep cycle the way looking at a backlit screen does. I’ve been using Redshift on my other computers, which helps, but that only goes so far. (1) is of course the reason I got the machine.

I essentially never turn on the backlight. Even when indoors, I can usually find a spot where there’s a lamp or something providing plenty of light to see the screen by, and it’s easier on the eyes without the backlight. It looks pretty much like a digital LCD clock (which is no coincidence; they’re based on the same technology). It’s not quite as nice to look at as an eink screen, but it’s still a huge step up from backlit LCDs, and being able to work outside when you need to be on a computer all day is nothing short of life changing.

The extent to which these screens have failed in the marketplace is remarkable to me; the impact they have on the experience of using a computer is astounding, but actually getting a usable computer with one of them required more hunting, research and general dedication most people would have put in. If you’re willing to get your hands a little dirty though, these screens are an amazing investment.